Papyri from Egypt provide extraordinary information about life in the ancient world. In a new study, I assemble a large database of Wheat Prices, Land Prices, Wages, and Rents from Roman Egypt over six and a half centuries, ca. AD 1-650.

The article appears as “People, Plagues, and Prices in the Roman World: The Evidence from Egypt,” Journal of Economic History 76 (2016) 803-39. A pdf is available HERE. The underlying data are available on darmc.harvard.edu and also HERE.

The study traces some long-range changes in factor prices in the Roman economy. I argue that during the early empire (ca. AD 1-165) the Roman economy – thanks to trade and technical development – achieved per capita economic growth during a long cycle of population increase. Even unskilled laborers in this province experienced growth.

Then the first major pandemic – the Antonine Plague – intervened. Nominal prices went up while real prices went down. Real wages stagnated, and rents dropped significantly. Modest recovery was evident before another pandemic, the Plague of Cyprian, helped send the empire into a monetary tailspin.

In the fourth century, the “silver” money system was undermined by inflation and replaced by gold. Rent levels started to rise again, but wage growth did not resume. The Justinianic Pandemic was a huge demographic event. Wheat prices thereafter collapsed. Wage growth was modest as labor was more scarce.

The ancient economy was far from stationary. Demographic shocks, monetary changes, trade, and technology all played a role in determining economic outcomes. 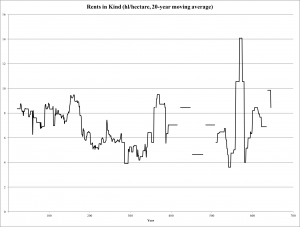