(A personal reflection on a study just published along with my colleagues Mike Engel, Matt Hamilton, Mike McCormick, Raymond Michels, and Chantal Peiffert)

Is the “Nazareth Inscription” really from Nazareth?

That is a question that historians have been unable to resolve for nearly a century. The Nazareth Inscription is a mysterious inscription written in ancient Greek. A Roman Emperor – whose name is not given – issues a law laying down extreme punishment for anyone who disturbs a tomb or the corpse inside a tomb. If it is really from Nazareth, the tantalizing possibility is that the law had something to do with the origins of Christianity. If so, it is the single oldest physical trace of Christianity that survives (with all due respect to medieval relics). 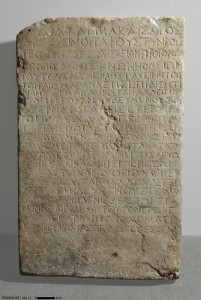 The inscription has a curious modern history that obscures its real origins and meaning. It was published only in 1930, a few years after the death of its long-time owner, a Parisian collector named Wilhelm Froehner. Froehner was an enigmatic person. He had owned the artefact for nearly fifty years at the time of his death, and he apparently took an odd satisfaction from secluding important antiquities in his private collection. His notes indicate that he acquired the stone in 1878 and was told it was “sent from Nazareth.” It is not impossible. In earlier work I have traced the likelihood that the inscription came in a bundle of antiquities that Froehner received in 1878 when his good friend, the Count Michał Tyszkiewicz, arrived in Paris for the famous World Fair that year. We know that Froehner acquired at least one other inscription authentically from Palestine at this exact moment.

The first editor of the inscription, Franz Cumont, already laid out two hypotheses. It is possible that the stone has nothing to do with Nazareth. The law could somehow reflect the broader program of the first Roman Emperor, Augustus, to bringing “law and order” to the Mediterranean after a period of upheavals. Froehner or his conduits could have easily been misled about the origins of the inscription, possibly by a savvy dealer looking to boost the price of the artefact. Or, Cumont suggested, maybe the stone really does have something to do with Christian origins. We know from the Gospel of Matthew, for instance, that there was heated debate from the very beginning about the resurrection, with charges that the disciples of Jesus Christ had surreptitiously removed the body. The debate spilled over into the cities of the Mediterranean. At least by the reign of the emperor Claudius, there were sufficient disturbances in the city of Rome itself that the emperor expelled the Jews from the city. The debate has gone back and forth between these two basic hypotheses for the last century and reached an impasse, a situation I have always found both frustrating and fascinating.

A few years ago, my former teacher Christopher Jones shared with me a draft of comments he was to give as the keynote address at the international congress of epigraphy. In the address, he suggests that we could potentially use scientific techniques to resolve questions of provenance such as those that surround the Nazareth Inscription. This comment was the impetus to give it a try. I wrote to the Director of our School of Geosciences at the University of Oklahoma and asked if there were anyone on the faculty interested in stable isotope geochemistry. Thus I met my colleague and now collaborator, Mike Engel, an expert in precisely this area.

Marble is a metamorphic rock made of carbonate minerals like calcite. Slight variations in the chemistry of these minerals (the ratio of stable isotopes in elements like carbon and oxygen) can help to identify the provenance of marbles. This technique has often been used in the study of architectural marble, for instance, to trace where the stone used for monumental buildings was quarried. There is a pretty good “library” of the stable isotope chemistry of the major Mediterranean marble quarries. But no one, as far as we can tell, has ever used this technique to trace the origins of the marble used in ancient inscriptions.

Today the inscription is in the Bibliothèque nationale de France. With the help of numerous colleagues along the way, we were able to obtain a sample of the Nazareth Inscription itself. Our colleagues at the University of Lorraine collected the samples and studied their elemental compositions, while the stable isotopes were sent to OU for stable isotope analysis. At this point, we caught a lucky break. A lot of the major marble quarries have similar and overlapping chemical signatures. But the stable isotope ratios in the marble of the Nazareth Inscription were unusual and interesting. They were a perfect match for a local quarry on the Greek island of Kos.

Here we caught some more lucky breaks. No one had ever suspected Kos as the origin of the Nazareth Inscription, of course. The connection is invisible, using conventional methods. But the geochemistry drew a line of connection, and the identification of the quarry opened up a new way to consider the old question of whether the inscription had anything to do with early Christianity. At first, we were excited to discover that there were strong connections between the island of Kos and the house of Herod – the family that ruled parts of Palestine during the lifetime of Jesus. Herod the Great and his son, Herod Antipas, who ruled Galilee (and thus Nazareth), are both commemorated in surviving inscriptions from Kos. Could the marble have moved along the same networks that connected Kos with the Near East? Maybe. But we also discovered something else unexpected.

During the 30s BC, a period of uneasy alliance between Octavian (the future Augustus) and Mark Antony, Kos was ruled by a tyrant named Nikias. Nikias was a famous fellow in his own day, with wide connections and many important friends in Rome. For reasons that are obscure, after his death, his tomb was broken into, and his remains were desecrated. The affair was famous in its time. A Greek poem about the episode survives. All of this provides a completely new and unexpected context for the Nazareth Inscription. The simplest explanation by far is that the tomb violation that prompted the emperor’s law happened on Kos. Cumont’s intuitions were right, and now we have a precise and very satisfying context for the inscription. The inscription was prompted by the affair of Nikias, not Christ.

The resolution of this century-old mystery is the result of team science crossing disciplines, with a lot of luck along the way.

← Pathogens and the Anthropocene